Context: The Montana Department of Natural Resources and Conservation (DNRC) is currently proposing to log state trust lands at the urban-wildland interface on the south side of Bozeman. The project will clearcut 500 – 1000 acres of trees, and result in approximately $200,000 of benefit to the trust beneficiary (the mostly the state “building fund”, in this case). The DNRC is offering two “Alternative” option for this project: Alternative A builds permanent roads and cuts a lot of trees, and Alternative B builds fewer miles of roads and logs fewer trees. (A third non-option is Alternative C, which defers action on this parcel for ten years, but requires that the DNRC be paid the market value of the timber.).

The proposed project area (with Strava heatmap data) is shown on the map below. 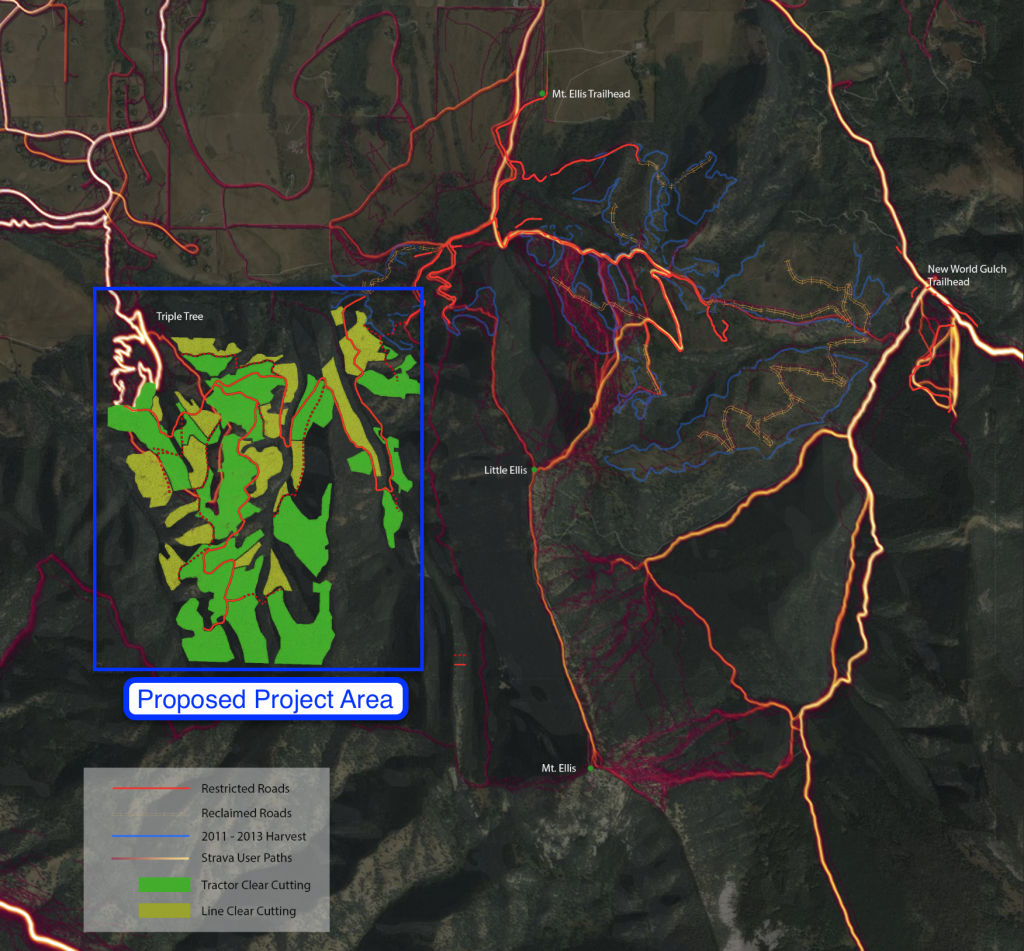 The DNRC has recently released its draft Environmental Impact Statement for the proposed project, and is accepting comments on the draft EIS until October 30, 2018. You can access the Draft EIS on the DNRC’s website here, and can submit comments of your own to the DNRC via email to LimestoneWest@mt.gov.

I don’t possess the wisdom or the knowledge to say whether this project is a good idea or a bad idea (I don’t like the idea of logging, but I can attest to the significant load of accumulated fuels in the proposed project area, which immediately abuts Bozeman’s water supply). However, as a frequent user of the nearby areas that have previously been logged by the DNRC, and as a data junkie, I do know that the draft EIS underestimates the extent and degree to which bikers, trail runners, hikers, and backcountry skiers will romp and play in the proposed project area if the roads are built and trees are removed. The comments that I have submitted to the DNRC to that effect are published, as an open letter, below.

Strava is a social network for fitness and outdoor recreation that records recreational activity using GPS. Like many local runners, bikers, and backcountry skiers, every time I recreate along the Gallatin Front, I record my activity using Strava. Strava, in turn, publishes this data in anonymized format on its Global Heatmap, available for free on its website. This data provides an empirical record of how many runners, bikers, hikers, and skiers recreate along the Gallatin Front.

Based on the empirical recreation activity data from Strava, the Draft EIS understates the quantity, intensity, and extent of future recreational use in three ways. First, when assessing Alternative B, the Draft EIS does not account for the existing informal trail from Triple Tree that would reach the roads built under Alternative B, providing access from the west as well as from the east. Second. The Draft EIS does not account for the recreational activities of backcountry skiers, who are significant (and growing) users of nearby Bear Canyon clearcut areas. Third, Strava data shows notable user activity on “reclaimed” roads from previous Gallatin Front harvests, suggesting that “reclaimed” roads should also be included the assessment of future recreation activities.

Describing Alternative B, the Draft EIS states, “additional access to other roads and trails in the project area from the Triple Tree Trail related to that road segment would not occur.” This is incorrect. The informal “upper hiking trail” extends south to within 100 feet of the Alternative B road and provides similar connectivity as the “0.7-mile segment of permanent restricted road proposed under Action Alternative A in the southwest 1⁄4 of section 4,” albeit via a steep trail. The Strava data shows that this informal trail is already heavily utilized. 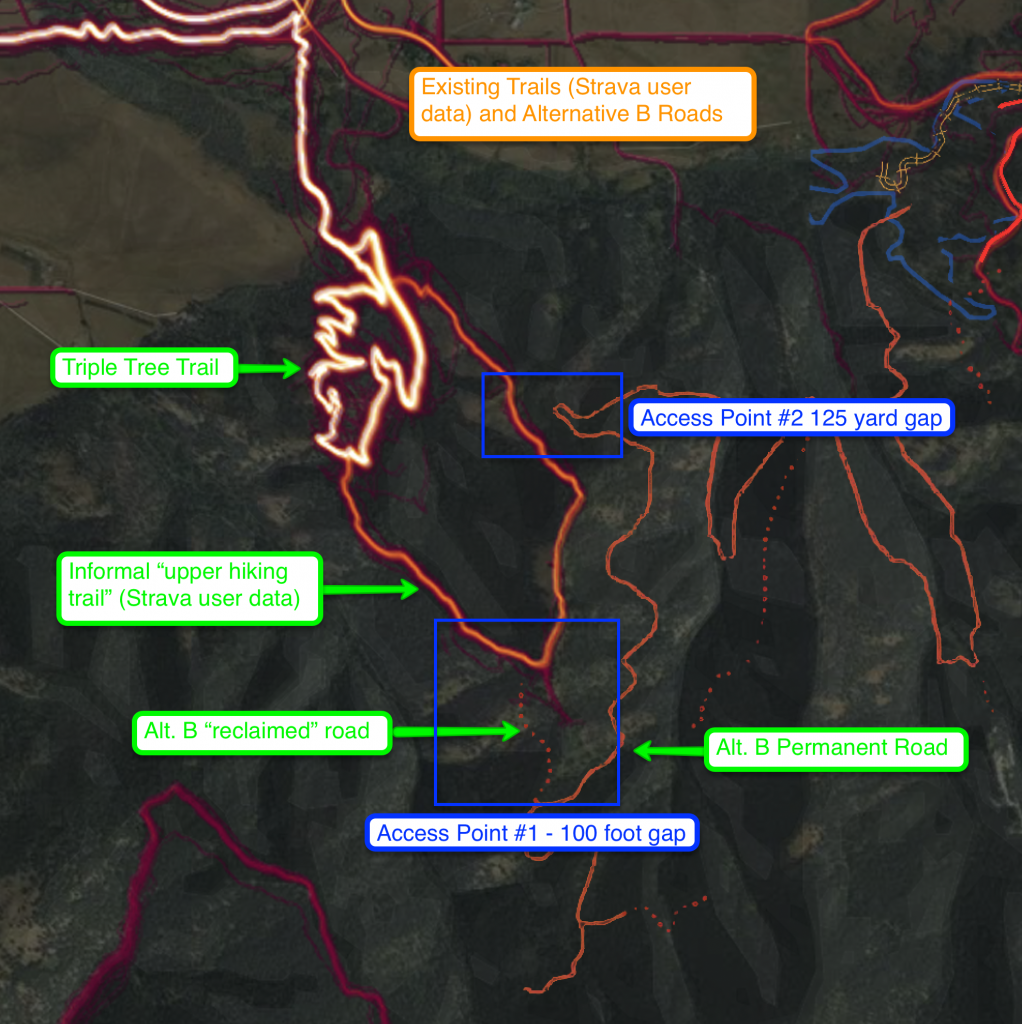 The map above shows two access points between the “upper hiking trail” and the Alternative B roads. Strava data already shows user activity crossing the proposed terminus of the reclaimed spur road on the southern-most extent of the “upper hiking trail” (“Access Point #1”) and significant user activity passing within 125 yard of the permanent road further to the north (“Access Point #2”).

Users will quickly close these gaps. With the completion of GVLT’s “Main Street to the Mountains” trail as of September 21, 2018, there is now a continuous trail network that connects from Main Street through Triple Tree. Under Alternative B, the existing user trail provides direct connectivity to the newly constructed roads, allowing the new roads to be accessed from both the Mt. Ellis Lane trailhead, the Triple Tree trailhead, and Main Street Bozeman. Although the quality of the western connection would be lower under Alternative B, the existing trails would nevertheless provide connectivity for hikers, mountain bikers, and trail runners and result in significant use from the west as well as from the east. The EIS should reflect this reality.

The draft EIS does not include or address the recreational activities of backcountry skiers. This population of recreational users has exploded in recent years. For example, between the 2015/16 winter and the 2016/17 winter, data from the Snowsports Industries of America reports that participation in backcountry skiing grew 15%—a trend that’s consistent with recent years and expected to continue.

I skied about 20 days in the Little Ellis (Bear Canyon Timber Sale) area last winter. The majority of other users I met were backcountry skiers and snowboarders—a population of recreational users not mentioned, anticipated, or accounted for in the draft EIS.
Compared to cross-country skiers (mentioned in the Draft EIS), backcountry skiers go further, faster, and can travel any terrain. The EIS analysis relies on a buffer assumption of 0.31 miles based on a study from 1998, which doesn’t remotely describe the use patterns of backcountry skiers, who have no need for trails (though will follow trails when available).

The Strava heatmap data shown in the map above reveals that all of the clearcut areas from the 2012 – 2013 Bear Canyon harvest with a slope angle of more than ten degrees are crisscrossed with the user tracks of backcountry skiers. 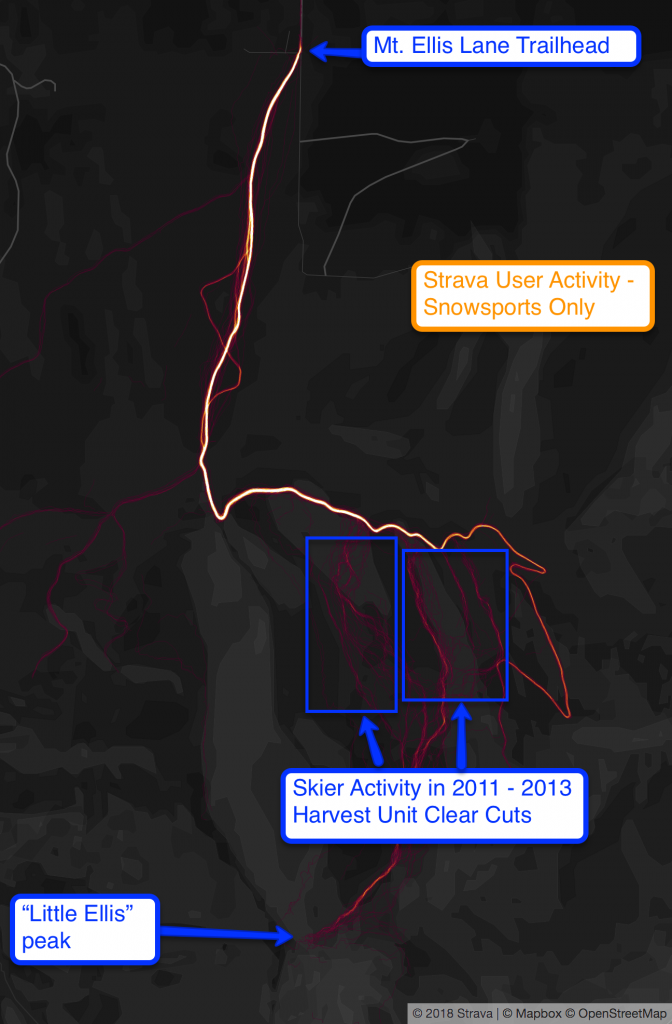 The steep slopes proposed for logging under both Alternative A and Alternative B would be a significant draw for backcountry skiers, including those who currently recreate in the previously harvested areas. Without accounting for the activity of backcountry skiers, the EIS assessment of wildlife impacts from recreation is incomplete. 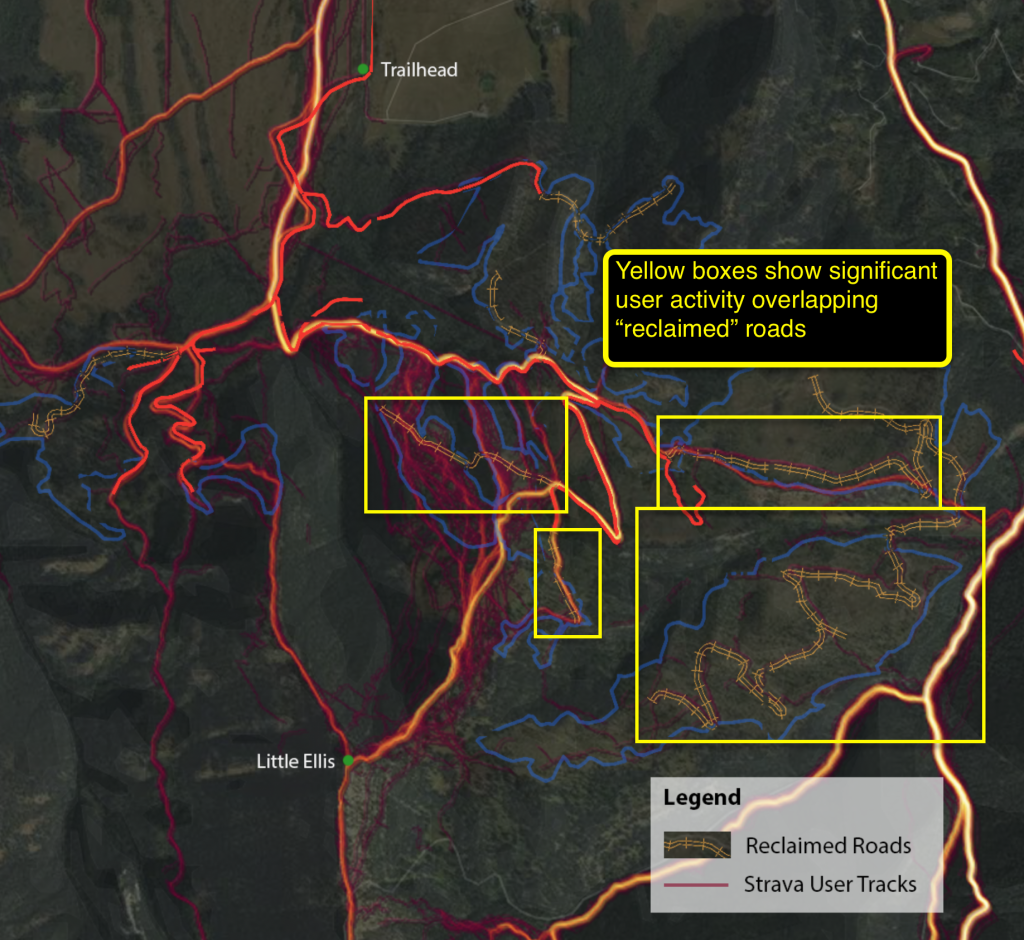 In the winter time, especially for a backcountry skier, a reclaimed road is indistinguishable from a maintained road. Unless the cutbanks are going to be filled in, the 41% of roads under Alt A and the 26% of roads under Alt B to be “reclaimed” should be included and considered the same as the permanent roads with respect to winter recreation.

Two truths and a lie: Mark Egge is an outdoor enthusiast, opera singer, and a transportation data scientist. He lives in Bozeman, Montana.
View all posts by Mark Egge →
This entry was posted in Outdoor, Public, Uncategorized. Bookmark the permalink.