Todd Wilkinson over at Mountain Journal recently published an article on population growth in the Greater Yellowstone Ecosystem. His article has a good point: population in Bozeman and the surrounding areas is growing quickly, and that population growth will have a negative effect on the environment.

Unfortunately, the article is sensationalized to the point of being misleading and misses the real story: not that we’re growing, but that we have a say in how we grow. People read the article come away thinking “omg Bozeman is going to be as big as Salt Lake in 2041!” which just plain wrong. The SLC urban area has 1m people and the Wasatch Front is home to 2.5m people. Even assuming an exaggerated population growth rate of 4%, it’ll take 80 years for the city of Bozeman to grow to 1m. Wilkinson plays word games with his reader, comparing the population of Gallatin County to the portion of SLC contained within the historic city boundaries—by which logic “Salt Lake City” has a population of less than 200,000, rather than the 1.19m+ reported by the U.S. Census Bureau. City to city, Bozeman’s has 45,250 residents to SLC’s 1,186,000. Region to region, Gallatin County has 105,000 residents to the Wasatch Front’s 2,468,000.

Wilkinson’s article centers around putting some actual numbers theoretical growth rates. The “Rule of 72” makes it easy to estimate how long it takes for a population to double: just divide 70 by the integer compound growth rate. At 2% growth, the population doubles every 35 years (70 / 2 = 35). At 3%, we double every 22.5. At 4%, we double every 17.5.

Bozeman’s recent Transportation Master Plan provides a table of various estimates of population growth, based on the rates provided by an assortment of professional demographers:

​
To the best my knowledge, the estimates above are based on demographic trends alone. Bozeman’s growing distances from where the majority of people live to the city’s primary amenities (downtown, the GVLT trail network, etc), combined with growing traffic congestion, diminishing air quality, crowding at Bridger Bowl and at the trailheads are all actively reducing amenity value of living in Bozeman, even while housing prices (especially in the parts of town with ready access to the city’s best amenities) continue to climb. Moreover, Bozeman’s recent dramatic growth has been fueled in part by the rapid growth of the MSU-Bozeman student population headcount, growing from 12,000 to over 16,500 in the span of the last decade–a trend which is not projected to continue. All of these factors are likely to depress Bozeman’s growth rate in addition to demographic reversion to the mean. Bozeman’s growth rate from 1970 to the present was < 2%, and sober professionals seem to think that this is the growth rates of 2 – 3% will prevail in the foreseeable future.

And let’s consider these numbers in a little bit of context. To read Wilkinson’s description, SLC-like levels of population will bring doomsday and the apocalypse all in one. While I’d rather live in Bozeman than SLC, I’ve considered SLC, and my friends who live in SLC are happy and active, and enjoy their lives substantially as much as I enjoy mine. And let’s not forget that, as Bozeman/Gallatin County grows to 200k+ by 2040, the Wasatch Front is expecting to grow to 4.7m.

The real story (that Wilkinson somehow misses completely) is that the impact of this growth will vary dramatically based on the policy and land use decisions that we make. If we grow at current Gallatin County density rates (approximately 0.7 acres per person), we’ll convert 100,000 acres of land from agricultural use to housing and commercial use as Gallatin County’s population doubles in the next 25 years (for context, the developed extent of the city of Bozeman is currently ~10,000 acres, and the “triangle” area from Bozeman to Four Corners to Belgrade ~50,000 acres). If we develop at Portland, OR levels of density, doubling our population in Gallatin Valley would only 14,1477 of additional land being converted for development. At current Bozeman densities, we’d convert 20,000 acres of land. 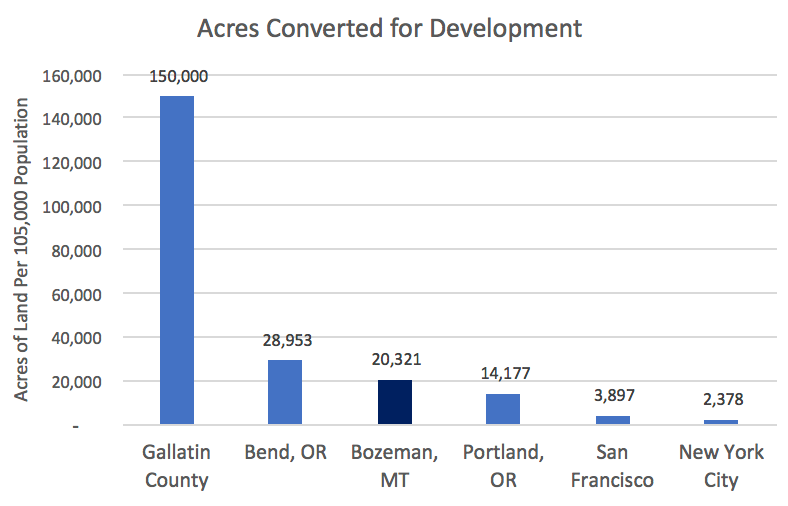 In my view, the real story here isn’t that we’re growing, and growing quickly–but rather that we have a choice in our land use and development patterns, and those choices will do more to determine the impact of that growth than the rate of growth.

To get a sense of what this looks like, consider the two growth scenarios below, excerpted from the the excellent “Gallatin Triangle Planning Study” published and hosted by Future West. The areas in yellow and orange show new development / land conversion.

The first scenario is likely growth between now and 2050 based on a planning policy that favors dense development (densities like current Bozeman density): 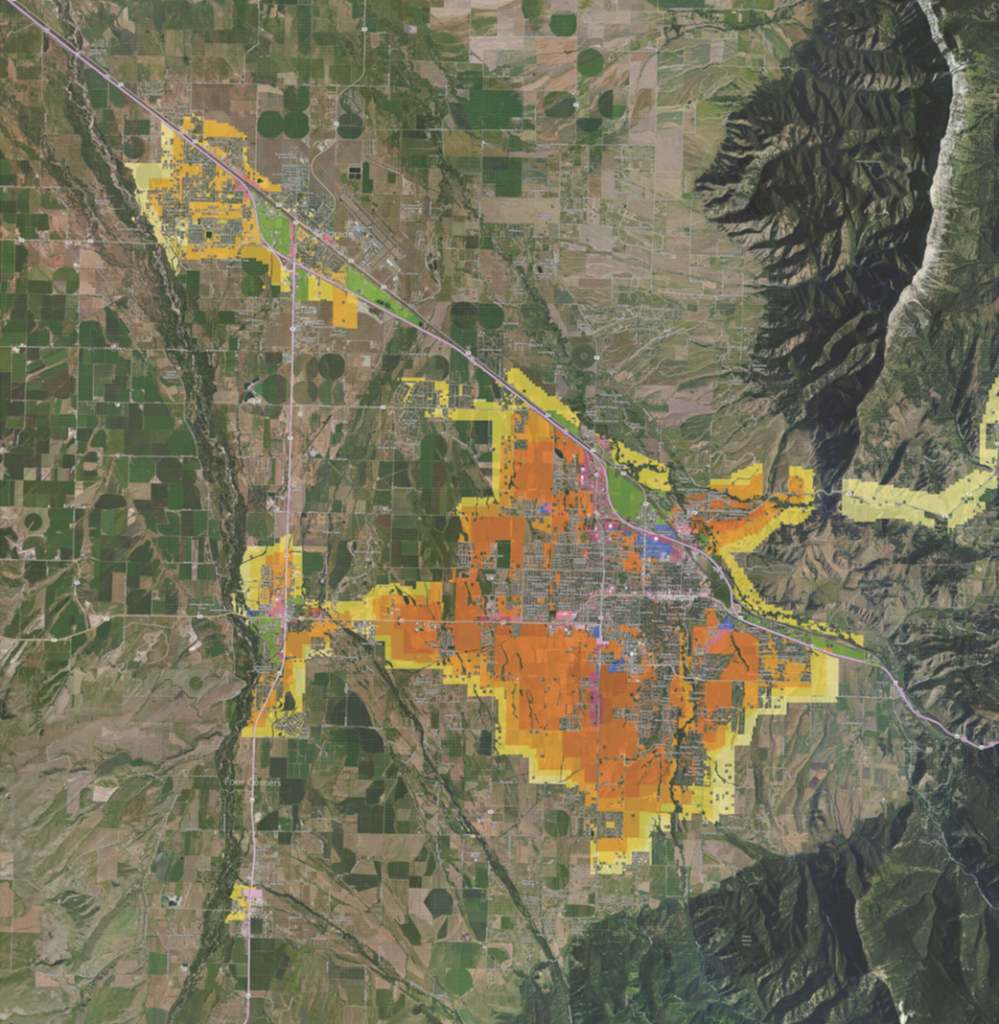 The second scenario shows growth based on the densities prescribed in the Gallatin County growth policy: 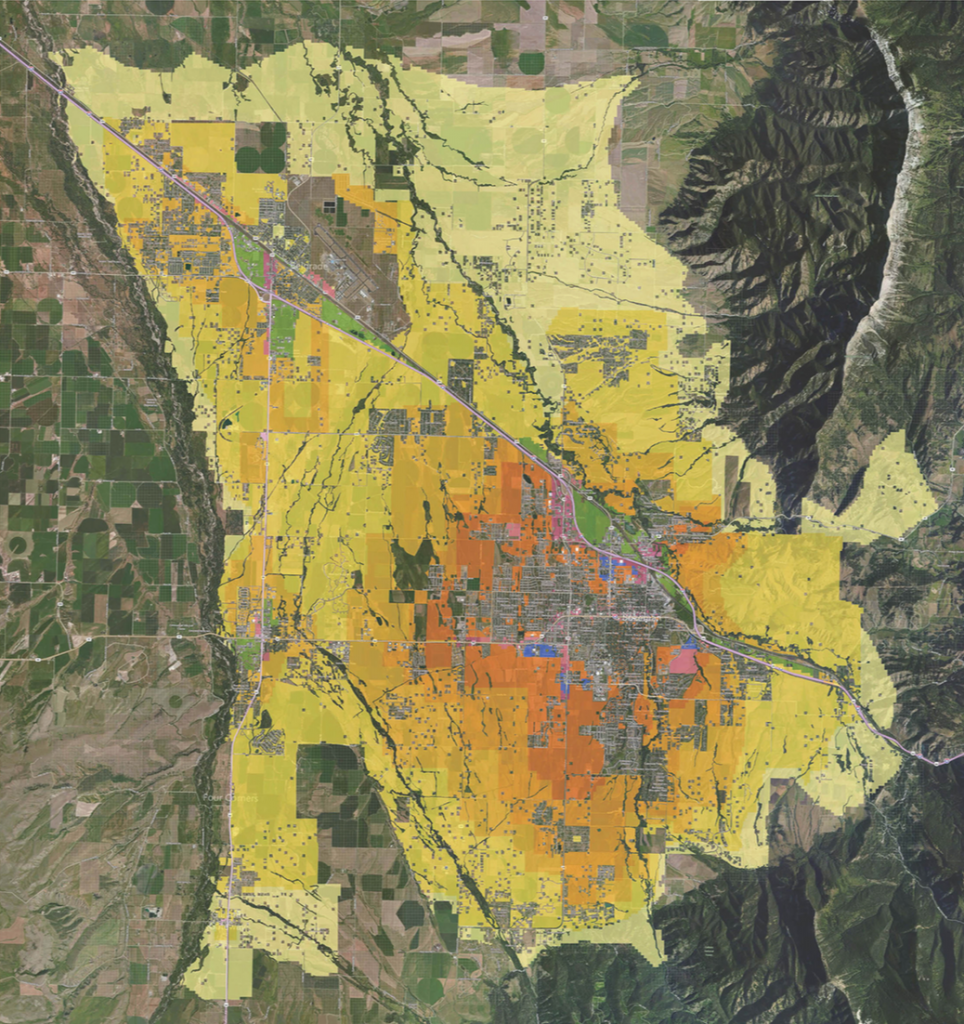 Of the two, one of the Gallatin Valleys looks much more like a place that I’d like to live in 50 years. We have that power, and we have that choice. You can start help today by making sure you vote in Bozeman’s municipal election (Mehl, Cunningham and Areneson all support growth policies that favor dense, sustainable development), voicing your opinion to City and, especially, County Commissioners, and spreading the word.

Two truths and a lie: Mark Egge is an outdoor enthusiast, opera singer, and a transportation data scientist. He lives in Bozeman, Montana.
View all posts by Mark Egge →
This entry was posted in Bozeman, Economics, Outdoor, Public, Rants and tagged bozeman, growth, planning. Bookmark the permalink.