Saving The Procrastinator Theater in the Strand Union Building

As part of preparation for an upcoming interview, I’ve been prompted to think about instances where I’ve had a personal impact. One instance that comes to mind is the struggle for The Procrastinator Theater’s home in the Strand Union Building. I led the student fight to ensure that the renovated building had the projection booth necessary for the projection equipment that provides a “theater experience” when viewing movies at ASMSU Procrastinator Theater on the Montana State University campus in Bozeman. This is just one story in the countless annals of individual contributions by committee directors to the joint history and success of student government provided services at MSU.

The Procrastinator Theater is a student-run movie theater on the campus of Montana State University, Bozeman. “The “Pro” is service of Associated Students of Montana State University (ASMU), and an organization of which I was steward for a year. Established in Linfield Hall 125 in 1991, “The Pro” has become an MSU campus institution, showing independent and second-run movies, and hosting events like the annual Rocky Horror Picture Show. Beloved by students, it’s fun, cheap, and a good alternative to drinking in the dorms.

For its almost-20-year history prior to my arrival, the Pro had operated out of an old lecture hall in the Ag building (Linfield 125), with a projection booth built in the back that accessed via a rickety ladder.

Running The Procrastinator for a year was the most fun job I’ve ever had, and I did it well. Relative to the year before, in my year attendance doubled (the first year-over-year increase in attendance in ten years) while net operating costs declined, thanks to some combination of Ryan Flynn’s creativity and pre-show entertainment, increasing screenings and marketing, the addition of a concessions operation, and engaging with community partners (including the Bozeman Film Festival) to bring more events and attendees into the theater.

At that time, the Strand Union Building (SUB) was in the midst of getting a much-needed face-lift. One of the major selling features in the campaign to get the generation of students prior to mine to vote to tax themselves $60 / year (or, future generations of students, rather) to pay for the building upgrade was the promise of a beautiful new theater for the Procrastinator, with new projection equipment, a bigger screen, and state of the art sound system. (And while the students dreamed of a new, beautiful film screening room, campus administration and facilities dreamed of a beautiful “showroom” auditorium for campus events.)

The Pro would move to its new home in the SUB the year after mine. My task was to lay the groundwork for a successful move. As I inspected the blueprints for the new space and discovered that, in the interval between when students had last been actively involved with the building design and the current plans, considerable changes had been made. In particular, Procrastinator Theater no longer had a projection booth.

The elimination of the projection booth was intended as a cost-savings measure, predicated on two assumptions (by facilities): 1) the movie industry would be switching to digital projection, and 2) as a consequent, the projection booth could be replaced with a ceiling-mounted, consumer-grade projector. These assumptions, it happens, were wrong on both points. Not only would it be five years before the non-theatrical movie distribution channel from which The Procrastinator rented its films would be able to distribute and screen digital prints, but also, when the conversion to digital occurred, and digital movie projectors are just as big, heavy, and hot as their analog counterparts. A ceiling-mounted consumer-grade projector would never be able to provide a theater experience. This came at a time when attendance at The Procrastinator had been in decline for ten years straight, reflecting the trend in the industry as a whole.

In the end, the change happened. Student government kicked in $31k, facilities matched this, and the final $31k came from the contingencies fund for the construction. When construction finished that summer, David Keto (the new ASMSU Films director) moved The Pro to its new home in the SUB, delivering on that promise that had been made to the generation of students before mine for a beautiful new home for the Procrastinator Theater.

In the end, student organizations have very little institutional memory. I’m not sure if the current director of the theater even knows there was a big fight back in 2007 for the space it now enjoys, and that doesn’t matter. What matters is that I loved that theater, campaigned intelligently and successfully for the theater, and today future generations of students continue to enjoy cheap, quality alternative entertainment on campus as a result.

Unrelated but related: in rooting through some old documents, I found my records of movie attendance figures for 2007 – 2008. Here’s a snapshot view: 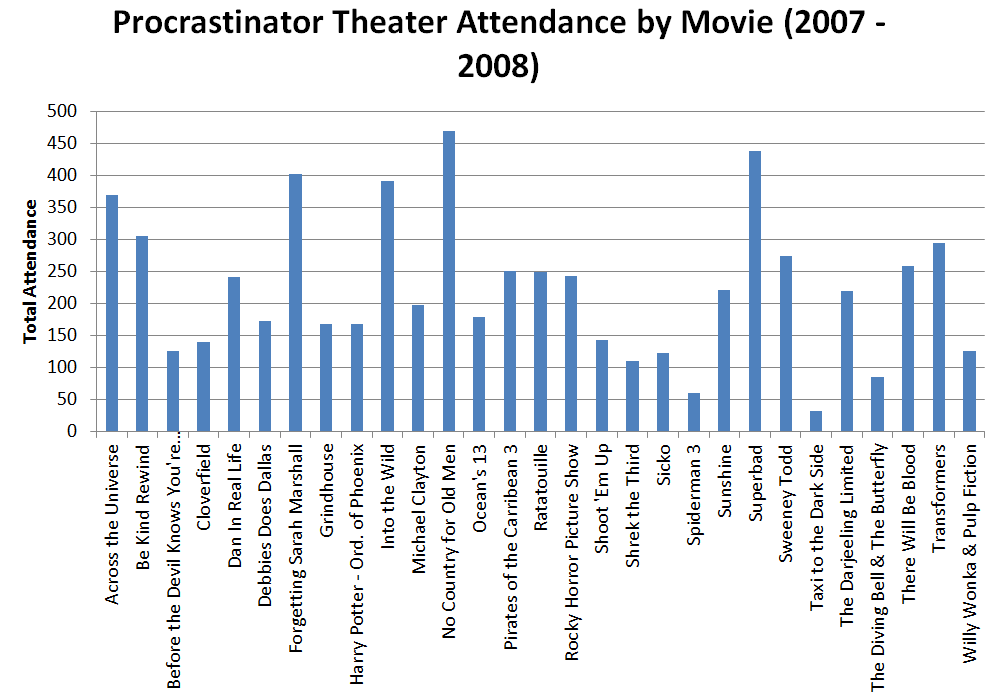 Two truths and a lie: Mark Egge is an outdoor enthusiast, opera singer, and a transportation data scientist. He lives in Bozeman, Montana.
View all posts by Mark Egge →
This entry was posted in Movies, Papers, Thoughts. Bookmark the permalink.